In May 2014, a shunting move to get rolling stock out of the Smeaton Road shed and into the rebuilt ‘Barn’ saw Fox, Walker and Sons No.242 (NCB No.3) out in the open air. This loco had new bearings fitted before the rebuild of M Shed in 2006, so is a rolling chassis and can be moved around.

The photos also give an indication as to the condition of the loco, and the scale of any restoration that might take place.

These pictures were taken by Michelle Scoplin of the Create Centre and appear here with her kind permission.

With the crane out of the way, the Ruston couples up 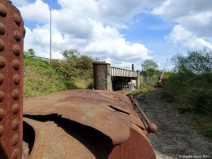 Gently eased out on to the running line